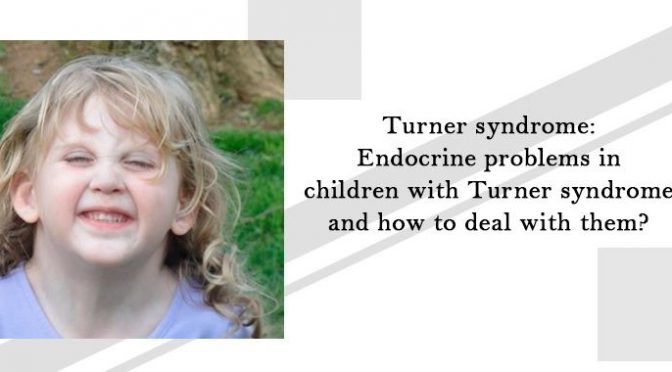 It is basically a genetic condition that occurs in girls only. 1 in every 2500 girls are affected by this syndrome. Girls with this syndrome are likely to be shorter than average and tend to have problems with fertility due to early loss of ovarian function.

Turner syndrome has nothing to do with anything the parents might have done. When a parent’s cells are being formed, turner syndrome occurs due to a random error in the cell division.

The name of this syndrome is coined after the name of Dr. Henry Turner, who noted some of the characteristics in his female patients.

The primary symptoms among girls with Turner syndrome who do not get treatment is that they are shorter than their peers with the final adult height being short, along with the other related features. These features include:

Extra folds in the skins that is related as webbing of the skin which extends from the tops of the shoulders to the sides of the neck.
A distinctive low hairline found at the back of the head.
No development of breast that is usually expected by the age of 13 years.
Menstruation doesn’t occur.
Appearance of more moles than usual

Girls affected with turner syndrome are more likely to be effected in ovarian function. This is the reason they would not show any development in their secondary sexaul characteristics as they may occur in puberty. This also means they would have problems with ovarian reserve, some would be infertile and can never be pregnant as adults.

Nevertheless, with advancement in the medical science and technology that include in vitro fertilization and hormonal therapy which can help girls with such conditions to achieve pregnancy in future.

Few other problems faced by girls with this syndrome are heart and kidney problems, high blood pressure, thyroid problems and abnormal bone development.

Nevertheless, if girls with Turner syndrome undergo the right medical care at the right time, with early intervention and ongoing support, they can also lead a healthy and normal life.

There is no definitive genetic treatment for such chromosomal disorder but there are many treatments that can help girls with such condition:

Growth hormone treatment for improving growth and increase in the final adult height. Estrogen replacement therapy that helps in the stimulating and developing secondary sexual characteristics. These children also need to be screened for various other organic pathologies like heart, kidney, thyroid, etc.

In case you want to seek a professional help for your daughter, do not hesitate to visit a pediatrician/pediatric endocrinologist for her physical and emotional well being.